On this page you will find general information about the small mustelids in the Netherlands. The texts are based on three chapters from the Atlas of the Dutch Mammals, published in 2016 (eds. S. Broekhuizen, K. Spoelstra, J.B.M. Thissen, K.J. Canters & J.C. Buys), Zeist, the Netherlands, KNNV publisher. Jeroen Mos and Tim Hofmeester were (co) authors of the chapters on, respectively, stoat and weasel, and polecat. 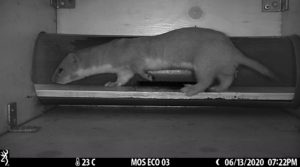 The weasel is the smallest carnivore. The top side is cinnamon to deep chocolate brown, the underside ivory white. The boundary between the two is erratic in the subspecies (Mustela nivalis vulgaris) that occurs in the Netherlands, while the smaller subspecies that turns white in winter (Mustela nivalis nivalis) has a straight border between the brown and white. The tail is brown and short. The weasel often has small brown spots on the white cheeks, the ears are small. In the Netherlands, the average head-body length for males is 20 cm, for females 17 cm. Males weigh a maximum of 150 g, females 85 g. The species is mainly diurnal. Short activity periods alternate with short rest breaks. The weasel is an excellent swimmer and climber. Territory size varies, depending on food supply and season, from less than one to ten hectares. Males have a larger home range than females. At high rodent densities, territories are smaller and weasel densities, at least locally, become higher. In years with low rodent densities, many weasels lead a more or less wandering existence. Weasels normally have a single litter per year, but in years with high rodent densities, weasels can give birth twice. A litter consists of an average of four pups. Weasels don’t live much longer than a year in the wild. Weasels prefer semi-open landscapes with adequate cover and structure, such as hedgerows and dry ditches. Often drier than stoat. The diet mainly consists of small rodents such as voles.

It seems to be going badly with the weasel in the Netherlands, where we suspect a decrease. A similar decrease in weasels is also observed in other countries in northwestern Europe. However, the cause is difficult to pinpoint. The leveling of the landscape through agricultural intensification, urbanization and busy traffic routes is likely to lead to isolation, weakening and local disappearance of populations. The disappearance of voles peaks due to the same causes is also debilitating. Nevertheless, with an eruption of voles, the weasel population can locally increase for a short amount of time, as was the case in 2014 (www.waarneming.nl). 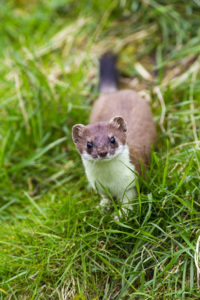 The stoat has a cinnamon to reddish brown back and tail with a (ivory) white to egg yolk underside in summer. The border between the two colors is almost straight and there are no cheek patches. In winter, some stoats turn partly or completely white. They always have a striking black tip of the tail. The species has a more powerful appearance than the weasel. The average head-body length is 29 cm in males and 23 cm in females. The length of the tail is at least one third of the head to body length. Males weigh a maximum of 350 g, females 230 g. Stoats are mainly diurnal. Their home range has a size of several to tens of hectares. Territories of males usually overlap those of several females. The mating season falls from mid-April to June. A peculiarity in the stoat, is that females can already be fertilized at a very young age in the nest. Stoats have a delayed embryonic development until around the beginning of March. An average of six young are born in April-May. Stoats prefer semi-open landscapes with lots of cover and structure, such as hedgerows and dry ditches. Often wetter than weasel, for example in lowland mires.The diet consists of small rodents, such as water voles, and birds. In some places, stoats have specialized in catching rabbits.

The hidden way of life and complex population ecology make it difficult to reliably estimate population trends for stoats. Consistent recording of prey deposited on buzzard nests in two locations in the Netherlands from 1974-2003 indicate disappearance and decline of the species in these areas. Generally, the distribution in the Netherlands seems to be decreasing. It is plausible that the combination of radical changes in the landscape and a reduction in vole peaks has led to an overall population decline. Possible additional factors are desiccation and climate change, given the link with wetlands and cool regions. The continued low rabbit population in parts of the country may also play a part. Locally, a population can temporarily increase at higher vole densities, as was shown in 2014 (www.waarneming.nl). 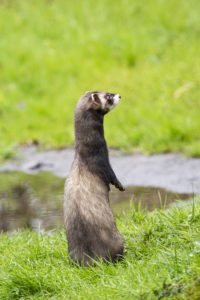 The polecat is a dark brown mustelid with a light undercoat that can easily be seen, especially on the flanks. Around the eyes it has a characteristic black mask, which is bordered towards the white-edged ears by white half-moons. The muzzle is white. Road casualties found in the Netherlands between 2001-2013 had the following mean sizes and weights: 31 adult males measured 70 cm and weighed 1135 g, 31 adult females 60 cm and 662 g. However, the variation in weight is great: some males weigh as much as 2 kg. The ferret is a domesticated polecat; it can be recognized by a lighter coat, light nose and tame behavior. Ferrets can interbreed with polecats where the offspring resemble light polecats. Feral ferret populations are found in various places. The polecat prefers a semi-open landscape with a lot of structure such as hedgerows and rough ditches. The diet consists of a variety of items, with amphibians, lagomorphs (hares and rabbits) and small rodents as most important prey.

Although no change in distribution can be seen in the Netherlands, the number of observed polecats in the NEM monitoring network for Day-Active Mammals shows a negative trend over the period 1997-2013. However, this trend is too uncertain to draw any conclusions. In addition, there was an unexpected peak in the number of sightings in 2014, probably due to the enormous food supply in the exceptionally good rodent year. This is in line with the uncertain downward population development of the polecat reported in most European countries.